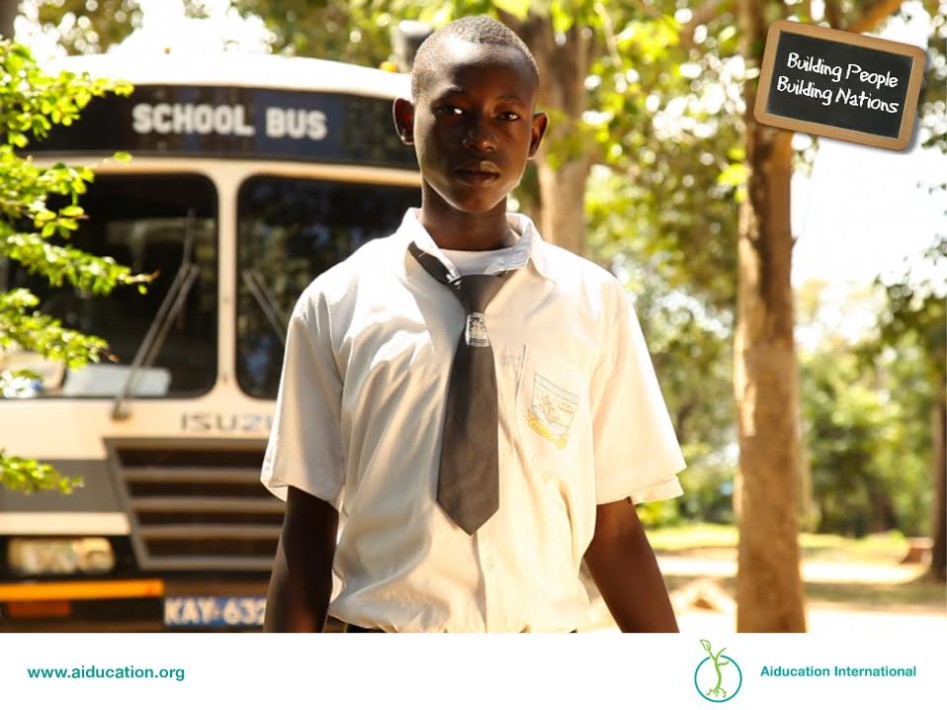 Aiducation’s founders, Kristin and Florian, were traveling in East Africa in 2007, when they met a Kenyan Clinician, Jeremy, during an overnight bus trip between Mombasa and Nairobi.

They started chatting during a rest stop on the trip, and the clinician explained that he and a group of friends were trying to provide scholarships to worthy primary school students who come from poor families so that they could pay for high school tuition. Jeremy himself came from a very poor background and got a scholarship 25 years previously, which had changed his life. In Kenya, as in many developing countries, primary school education is free, but high quality secondary education is not, and many poor families cannot afford to pay for high school. Despite their efforts, Jeremy and his friends were only able to pay for a few scholarships per year.
Aiducation was born in 2007, after the PhD students returned to Switzerland and found a few friends and family members in Switzerland who wanted to finance the first scholarships for Kenyan high school students. By the end of 2008, Aiducation, which was entirely run by volunteers, had managed to finance 24 scholarships, all of which came from private persons and a few service clubs.

Matthias Meier, currently CEO of Aiducation Switzerland, heard about Aiducation from a friend who was volunteering for the organization, and joined as a volunteer early in 2009. According to Matthias, the volunteers at Aiducation all come from different backgrounds – education brings everybody together.

“You see the potential in the students, but they are simply unable to materialize it because they don’t have the money to go to school – this waste of human potential is a fact we can’t accept given the various global challenges of our time,” Matthias Meier, Aiducation

In 2010, Matthias took over the lead of the Swiss chapter of Aiducation, still in a voluntary role. At this time, he was working as a management consultant in the food & transportation industry. As his enthusiasm for Aiducation grew, he increasingly felt the imbalance between his voluntary work and his consulting job; the consulting job was all about maximizing corporate profits; this was in strong contrast to his work at Aiducation, which focused on creating impact for motivated and deserving individuals. He found himself at a crossroads when he was confronted with the opportunity to become a partner in his consulting company in 2013. He made the decision to quit his consulting job, and to support the development of a sustainable business model for Aiducation together with a team of about 10 students and young professionals from across the globe.

“The vision behind Aiducation of ‘Building People. Building Nations’ was strong and convinced me right from the beginning. Developing Aiducation and shaping our impact was like doing a practical MBA.” Matthias Meier, Aiducation

By the end of 2015, Aiducation had financed more than 1000 scholarships, and is providing more than 200 new scholarships per year. More than two thirds of the Aiducation students belong to the top 15% of their classes when finishing high school, and qualify directly for university scholarships. The unemployment rate in Kenya is still incredibly high though – it surpasses 40%. In response to the gap in between talent and opportunities, Aiducation and their partner SwissRe piloted two start-up academies for almost 50 alumni each in 2014. Start-up academies are one-week training session in which alumni come together to learn the key principles of entrepreneurship. The participants pitch their own ideas at the beginning of the week, the 8-10 best ideas are selected by the students, and groups of students work through the process of creating a business plan which is then pitched to a jury at the end of the week. Another two start-up academies ran in 2015, and in 2016 there will be four such one-week sessions. Aiducation is also expanding them to a new chapter that has been running since 2014 in the Philippines. From these academies, 11 ideas have been brought to fruition already.

“Real value is created when organizations and their members share their skills, knowledge and experience with our high potential students”. – Matthias Meier, Aiducation

Aiducation prefers to describe itself as a ‘For-Impact Organization’ rather than a non-profit. Everybody is still receiving very low salaries, and everybody in the team works individually. There are now 2.5 FTEs employed within the Swiss chapter and about 10 volunteers invest at least 5 hours a week. Matthias says

“this works as a model, because you find the right people through volunteering networks. More and more people are interested in investing time to create impact in exchange for being exposed to an entrepreneurial environment with lots of independency and room for personal development. There is a big turnover among the volunteers, but there is still huge potential to create impact through the skills and networks every individual is willing to contribute.”

Aiducation operates according to a few important principles: 1. They focus on education only and make use of existing educational infrastructure in the developing countries in which they operate (rather than building new schools, for example, they pay school fees), 2. They follow the principles of meritocracy, so only the top primary school students are eligible for high school scholarships. The idea is to identify and support potential multipliers, and to unleash their full potential in order to address local societal, economic and environmental challenges 3. They operate transparently, in contrast to many non-profit organizations that operate as black boxes. Aiducation does a pre-selection of scholarship candidates, and donors select the beneficiary; 90% of the value of the scholarship (CHF 3’200.- over 4 years of high school or CHF 800.- a year) pays the cost of tuition, and donors can track the progress of the students through school reports. 4. The fourth critical pillar is mentoring and coaching. At least once during high school the students supported by Aiducation get together for a week to learn from each other and from mentors. During these weeks they are exposed to different ways of thinking about broader societal issues, and they connect with each other to come up with ideas about how to address these challenges. After high school, Aiducation offers various programs for alumni in collaboration with corporate partners on topics like entrepreneurship, financial literacy, project management and career planning. The idea is to create a network of future change-makers for these countries.

“I believe in the strategy of going deep rather than going wide. Go slowly.” – Matthias Meier, Aiducation

We asked Matthias how he and Aiducation first got in touch with SEIF:

‘We applied for the SEIF award in 2011, and we made it to the top 10 – we were invited to a pitch session, and we were promoted through the competition. In 2013, I was at the point of quitting my job, and I decided to join the business development (now the business growth) course to get some external ideas. It was quite affordable, and I took the chance to do it. I still meet people from the time I was in the course, and I was also invited to be a speaker at subsequent courses. The interaction between the enterprises was interesting, and also the input speeches were valuable. Then I was invited to join the Impact BOOST program with PwC. The relationship with the mentor gave us great access to his extensive experience and huge network. I am still meeting with the mentor even though the program is over. He is always willing to challenge me and our business model and knows almost every CEO in Switzerland by first name.’

“Aiducation will be part of my DNA for the rest of my life.”

Do you want to know more about Aiducation? Visit www.aiducation.org.